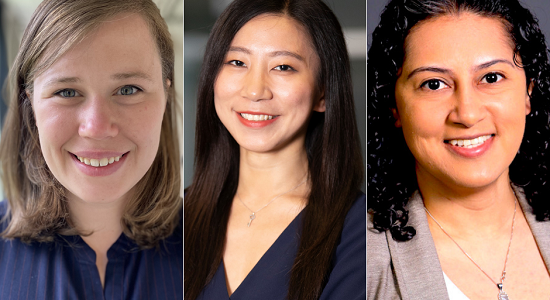 From L to R: Elisabeth Prince, Joyce He, and Fahima Dossa

Three former U of T graduate students, Elisabeth Prince, Joyce He, and Fahima Dossa , have been awarded the prestigious Governor General’s Gold Medal for academic excellence.

The medal, given each year to three students determined to have the highest academic standing, is one of the highest honours reserved for graduate students in Canada.  Candidates are evaluated on the basis of their performance in degree courses, the merit of their thesis and its defense, and the originality and importance of their research.

Before Elisabeth Prince was conducting experiments in the lab, she was cooking up new recipes in her father’s kitchen. The Governor General’s Gold Medal winner says her love of chemistry was inspired by her father, a professional chef, and the times she spent working for him in his kitchen.

“I think the experimental aspect is the same,” she explains, laughing. “If you have this ingredient, how will it change the flavour? You have to try different techniques. I think that is why I was so drawn to chemistry.”

For her dissertation, Prince, who completed her PhD in the Polymers and Materials Chemistry Program under the supervision of Professor Eugenia Kumacheva, focused on developing hydrogels that mimic the nanofilamentous extracellular architecture found in human tissues. By using nanocellulose, a form of the organic nanoparticle derived from plant matter, Prince was able to create a new, sustainable medium that not only displayed mechanical properties similar to biological tissue but also successfully supported the growth of patient-derived micro-tumours. It’s work that will have a significant impact on the field – the hydrogels offer a new biomaterial for developing individualized cancer therapies, without the problems of the currently used cell culture matrices derived from mice.

Reflecting on her academic success, Prince says that cultivating interests outside of her research was crucial to keeping her motivated. In addition to cooking and baking, she also enjoys figure skating, a sport she returned to in graduate school after a long hiatus. She believes it’s good to have a sense of accomplishment – like learning a new spin – that has nothing to do with science. “It helps keep a sense of balance in your life.”

She’s also deeply grateful for the tight-knit group of friends from her program, many of whom she still speaks to regularly, as well as the support and guidance of her supervisor. “I felt like my supervisor really believed in my project and saw potential in me. So even when I was demotivated and things weren’t working in the lab, that helped lift me up and made me keep going.”

Prince is currently pursuing an NSERC postdoctoral fellowship at MIT, where she is developing new chemical strategies for managing plastic waste. Her long-term goal, however, is to come back home to Canada. “I want to build a research team there to help grow Canadian innovation in the science sector. I want to contribute to training the next generation of scientists. That’s something I’m really passionate about.”

Curiosity may indeed have killed the cat, but for Joyce He, it was the secret to surviving and thriving in graduate school.

The U of T alum (PhD ’21) and Assistant Professor of Management and Organizations at UCLA’s Anderson School of Management has received a 2021-2022 Governor General’s Gold Medal in recognition of her stellar academic record, which includes six peer-reviewed journal publications, numerous grants and awards, and an acclaimed dissertation that proposes a solution to women’s under-representation in promotions using insights from behavioural economics. But for He, her academic career is still less about accolades and more about cultivating what she calls “a learning orientation.”

“A lot of the time in graduate school, there’s a lot of pressure to produce research or be strategic with what courses you pick,” she says in a Zoom call from Los Angeles, where she has lived since August 2021. “That pressure can often lead to burnout. But I think I was motivated more by curiosity, which guided me towards the projects I ended up doing. Ultimately, graduate school is a marathon and not a sprint, and that curiosity helped me sustain my interest in doing research.”

At the University of Toronto, He made waves with her interdisciplinary approach to organizational behaviour, drawing on concepts from psychology (her undergraduate specialization), behavioural economics, and sociology to propose systemic changes to combat gender discrimination in the workplace.

Where most existing approaches to combating workplace sexism – like Sheryl Sandberg’s now-infamous “Lean In” philosophy – place the burden of responsibility on the women navigating the system, asking them to adjust their behaviour in complex and often self-defeating ways, He was more interested in changing the system.

“I think it’s unfair to ask women – or minorities in general – to navigate these competing demands, where they are penalized no matter they do –whether they conform to society’s expectations of women or violate them. So, instead, of only trying to fix decision-makers’ minds or placing the onus on women, how can we restructure the system to be more fair and inclusive so there’s less space for bias in the hiring process?”

In her dissertation, “Lean In or Don’t Lean Out? Opt-Out Choice Framing Attenuates Gender Difference in the Decision to Compete,” He proposed a simple, inexpensive, and effective solution using the concept of choice architecture – changing the framing of a choice without changing its underlying content. Instead of using opt-in framing for promotions – asking people to self-nominate to apply for an advanced position – she suggested a shift to opt-out framing. All qualified candidates would be considered for a promotion, with people having the option to opt out of the competition.

As with other examples of opt-out framing – like marketing emails, where customers are automatically subscribed to a mailing list – He found that people’s preference for the default meant that women participated in much greater numbers when the choice was framed as opting out. In one study, for instance, using opt-out framing on a math test showed that women’s participation increased from 47 percent (from opt-in) to 75 percent, while men’s participation rose from 72 percent to 76 percent.

Conversely, many studies, including her own, have shown that women tend to apply in much smaller numbers than men when the mechanism is self-nomination – despite being equally qualified.

He is hoping she will be able to test her work in a real-world organizational setting soon. In the meantime, she’s encouraging her students at UCLA to keep an open mind, get curious, and ask lots of questions.

“A grad student is still a student!” she exclaims. “You are there to learn. And the more you learn, the more you realize how much you don’t know. And that’s when you start exploring different questions you’re passionate about.”

For Dr. Fahima Dossa, winning a Governor General’s Gold Medal for her doctoral work on gender-based pay inequity in surgery “validates the role of women in medicine.”

“Throughout the process of completing this work, I hit a lot of walls,” recalls Dossa. “People said the findings couldn’t be true or that the topic simply wasn’t worth researching. So I think the medal validates that this is an area worth talking about and an area deserving of more research.”

Dossa was in the second year of her general surgery residency at U of T’s Temerty Faculty of Medicine when she stepped out of the program in 2016  – through the Surgeon Scientist Training Program – to pursue a PhD in Clinical Epidemiology at the Institute for Health Policy, Management, and Evaluation. The Queen’s School of Medicine graduate had always enjoyed research, and wanted to gain the skills to be able to run a research group in the future. Though she took on a number of different research projects during her doctorate, racking up an impressive 64 published or accepted pieces, her dissertation topic was one that spoke to her lived experience as a surgeon: gender bias.

While many researchers had highlighted the problem of pay inequity in surgical medicine, Dossa took an innovative approach. In a cross-sectional, population-based study using administrative databases, she examined the differences in hourly earnings for male and female surgeons in a fee-for-service system and found that female surgeons made 24% less than their male counterparts for every hour spent in the operating room. Even though the fee-for-service system had been touted as the solution to gender-based pay inequity, Dossa’s research showed that it was, in fact, inadequate.

In 2019, Dossa published her research in the prominent U.S. medical journal JAMA Surgery, where it quickly climbed into the top 5 per cent of the publication’s high-impact papers. In November 2021, a follow-up article in the same journal saw her exposing the referral bias that helps entrench the wage gap – male surgeons consistently choose other male surgeons for referrals over equally qualified female surgeons.

“I think the work resonated with a lot of people,” she says. “Especially women in surgery, but also men, as they reflected on the experiences of their colleagues. The work was also very timely. We were going through all the movements that were calling attention to gender issues across industries.” (The Globe and Mail featured Dossa’s work on its front page as part of its Power Gap series.)

Still for many reviewers, the findings were a hard pill to swallow. Dossa received harsh criticism, especially as she tried to get the research published. “I’ve done a fair amount of research across different disease types and across different types of surgery,” Dossa explains, “and I can say, bar none, that this has been the hardest work to publish.”

What kept her going was her abiding love of research, as well as the knowledge that her work had the potential to affect real change for women working in surgery.

“I really enjoyed thinking about how we could find the answers to these questions, methodologically and statistically,” she shares. “And of course, you do reflect on the stories you hear. Early on in my training, I would experience various microaggressions and think I was the only one, that they must have something to do with me. But every woman I talked to had a similar story. And it became very clear that these experiences had nothing to do with us. They were a reflection of how women are viewed in medicine and in surgery.”

Dossa, who completed her PhD in 2021, has now returned to her residency. She continues to advocate for policy change regarding wages for women in surgery, and has met with various groups at the local, provincial and national levels who are interested in working toward pay equity.

“When I think about what led to this work being awarded the medal, I think it’s because it naturally lends itself to change,” she says. “And knowing that this kind of work can create a better environment for the next generation of trainees is what continues to motivate me in this area.”