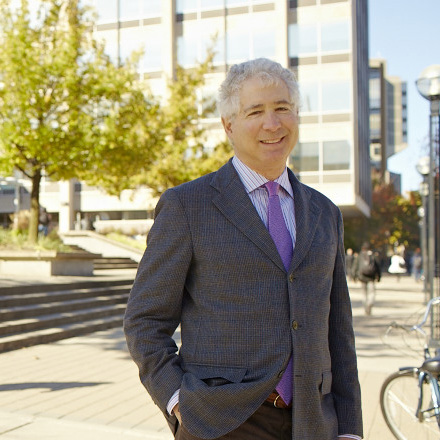 “It's wonderful to teach so many students from such diverse backgrounds.”

I was born and raised in Chicago. I headed off to Cornell University in 1964 and to Harvard for graduate school in 1968. I’m very much a child of the U.S. campus unrest of the sixties; like many such products, I was a bad student at both the undergraduate and the graduate level. We were simply too unsteady and distracted to do any serious work. I was lucky enough to encounter some outstanding teachers who tried to provide an anchor for their students amidst all that chaos. To them I owe my devotion to the study of old books.

If a single thread runs through all my work, it’s the problem of compassion and its relation to justice, as explored through the writings of the greatest thinkers who have addressed the subject. This has included Rousseau among the modern writers and Thucydides among the ancient ones. I’ve written extensively on both and have several new projects on Thucydides afoot. I’ve also been writing my own book on compassion, which I hope to finish in 2014. My project of the future is a series of studies of the Hebrew Bible, trying to trace the emergence of the notion of righteousness. Lastly, I’ve written a lot of journal articles, trying to apply what I’ve learned from the study of political philosophy to current topics like humanitarian intervention and the role of compassion in domestic politics.

The relationship between supervisor and student is a complicated one. Your student may be as or more intelligent than you are—those are the students you hope for, and I’ve had many of them here—only less experienced. I’ve always thought of graduate school as an apprenticeship in which the teacher instructs primarily by example. You want to help the students form their own projects and find their own styles—but you want them to do it on schedule and to define a topic that’s both plausible and marketable. The student faces three successive challenges: to complete the program benchmarks on time, to form a project without dawdling, and to persist to the end despite the inherent loneliness of dissertation writing. The supervisor can help with all three—but not all that much.

While much has changed during my 40 years here, one crucial thing hasn’t: the University’s commitment to genuine intellectual diversity. My own department [of Political Science] has always prided itself on its plurality of approaches, both political and methodological: so it was when I arrived in 1973, and so it remains today. An outlier like myself—a humanist among social scientists who holds many contrarian views—could not have found a more favourable situation. Its crown has been my contingent of colleagues in political theory, one of the largest, strongest, and most diverse in the world. Since doctoral supervision too is a collegial activity, I owe a great deal to them.

U of T has proved a wonderful place to teach. As an undergraduate institution, it’s now so blue collar. It’s wonderful to teach so many students from such diverse backgrounds who are of the first generation in their family to attend university. And because so many of them remain in Toronto, they can become your lifelong friends.